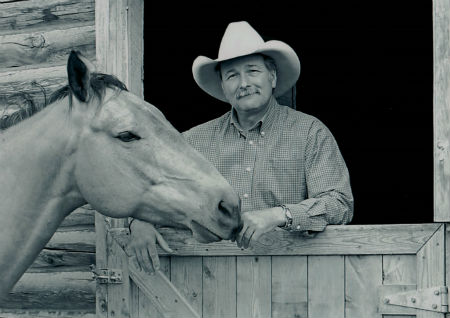 Michael Thomas is a Wyoming native, has been sculpting for over 30 years.

Having grown up working on cattle ranches in remote western Wyoming and along side some real old timers, he feels lucky to have heard some of their stories, wit and sense of humor.So, it’s natural for Mike to possess a love of the west and its rich history.

Raised in an artistic family he grew up with such heroes as Will James and Charles Russell just to mention a couple.

Michael Thomas graduated from the University of Wyoming in 1977 with a degree in Animal Science and Pre-veterinary Medicine. After graduation Thomas worked in the Agri-business field as both a Loan Officer for Farm Credit, and Manager of a Feed and Ranch Supply business for 16 years before turning to his art full time in 1993. That year he completed a monument depicting both sides of the infamous “Johnson County Cattle War” which stands near the First National Bank of Buffalo, Wyoming. Two of Thomas ‘s proudest moments were the installation of “Good Ride Cowboy” Life and one half monument of the late Chris LeDoux in Kaycee, Wyoming and the life-and-one-half monument of “Breakin’ Through “ which graces the North Plaza of the Rochelle Gateway Center at Thomas Alma Mater University of Wyoming in Laramie.